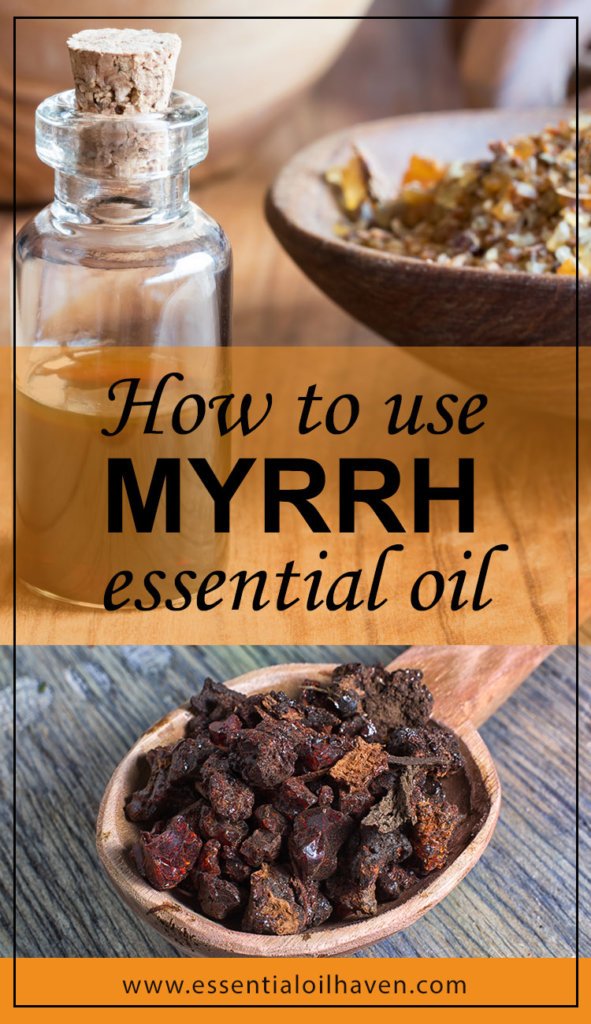 Myrrh essential oil is maybe not the most widely used essential oil, but it is definitely one with a vast history! It has been known to be an essential ingredient in religious rituals, and it is also being used in medication, aromatherapy and skin care cosmetics.

As a short summary, Myrrh is used to aid blood circulation and digestion, for elimination of bacteria and fungi and even nasal congestion, and for dental care. Spiritually, it is used for meditation, prayer, and ceremonies. It is said to bring with it the timeless healing of mother nature by bearing heavenly ancient secret essences.

This post contains affiliate links, which means if you make a purchase through these links, I may receive a small commission at no extra cost to you. Read my full disclosure policy here.

The History of Myrrh Essential Oil

Myrrh is THE sanctified incense used in Jerusalem. Multiple times, Myrrh has been mentioned in the Bible as it was one of the gifts given by the tree wise men who visited Jesus. The other gifts included Gold, which symbolizes kingship, and Frankincense, which symbolizes worship. Myrrh symbolized purification, mourn and death. That said, Myrrh was also an essential ingredient of holy anointing oils used in anointing of high priests and kings. Offering of this holy oil was an important part of the service in the temple because of the important roles and purpose that it partakes in sacred rituals.

Even long before, Myrrh oil has served essential purposes. In 1st BC, Diodorus Siculus recorded that myrrh was traded from indigenous Ethiopia until it reached the Mediterranean region. Middle Eastern Cultures as well as Egypt used oil scented with myrrh in worship rituals. Greek soldiers used this oil in combat to clean, disinfect and stop wounds from bleeding. It has never been a secret that myrrh oil has served a lot of uses. Even the Chinese used this essential oil as a medicine way back to Tang dynasty. Up until now, myrrh is widely used by people around the world.

How Is It Made? 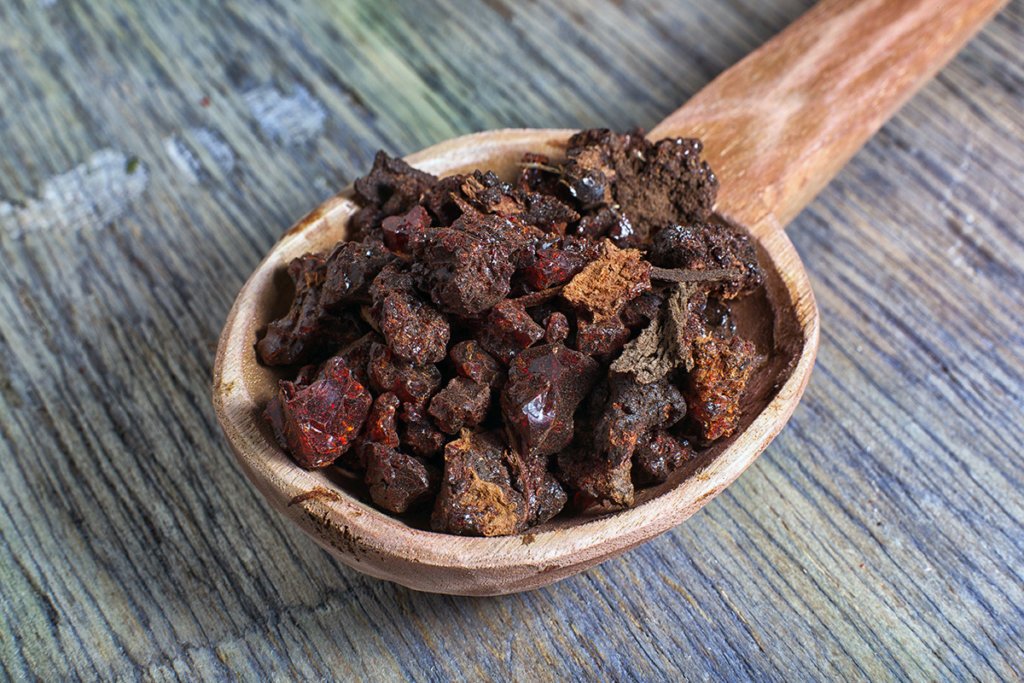 Use code 21PureEO15 for 15% off all regularly priced items, excluding wholesale.

Myrrh essential oil is extracted from dried resins by steam distillation. The “resin” is an organic substance that flows out of a knotted, small, thorny tree, Commiphora myrrha, which is usually found in Middle Eastern and African countries.

To gather resin, a tree is cut. Cutting the tree allows it to bleed a sticky flammable substance. This gum-like substance is allowed to dry up and produce and tear-like saps to a size of a walnut in the trunks of the tree. Then it is collected and used to extract myrrh oil.

The word myrrh comes from the Arabic word “murr” which means “bitter.” Myrrh oil is dark amber / yellow-ish in color and sometimes turns yellowish green. It has a distinct rich, smoky, balsamic and sweet but sometimes bitter smell. 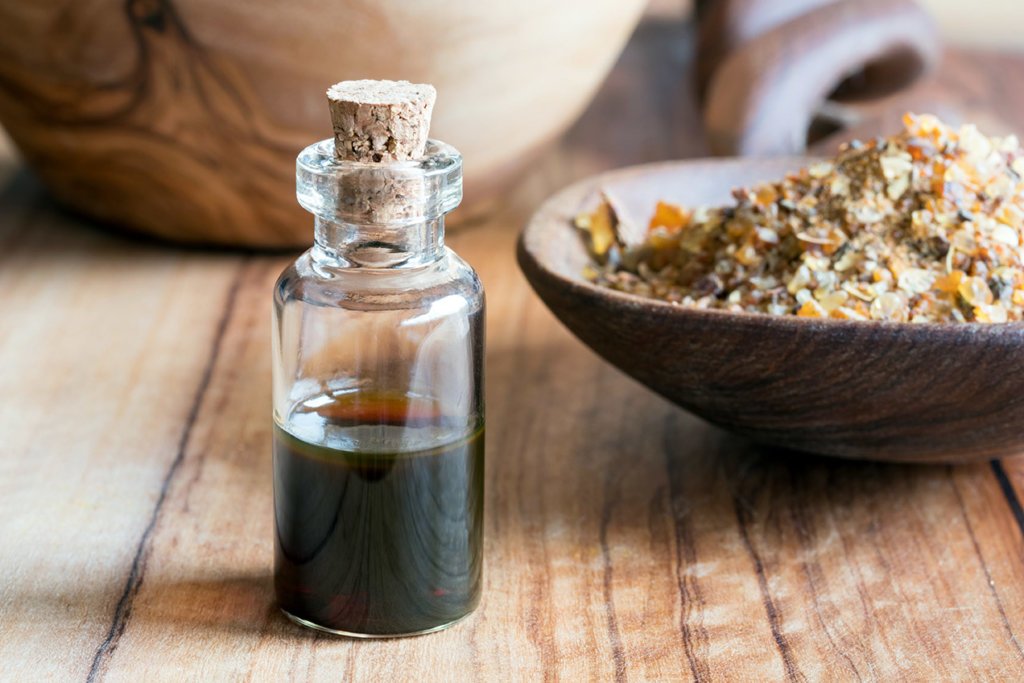 RELATED:  5 Ways to Use Tea Tree Oil for Acne

Myrrh oil has reported side effects like allergies. Extra sensitive skin might not react as expected upon application of essential oil. Better test the oil in other parts of the body like inside of the elbow to see if certain reactions might occur.

Pregnant and nursing women are discouraged to use myrrh oil. It is always best to consult a trusted health expert or physician first before using Myrrh essential oil.

Where To Buy Myrrh Essential Oil

Browse your favorite essential oil brands website for a Myrrh Essential Oil. You should find it in its original form as a single oil, plus sometimes a roll-on that will often be blended together with Frankincense. I’ve also seen it as part of skin care lotions or facial toners. 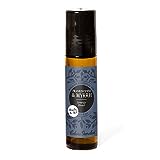 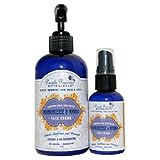 As I'm getting started with essential oils for more natural well-being in my life, I hope to provide you with many valuable resources, tips, tricks and reviews to help you do the same. My essential oils journey has evolved over the past 5 years and I am now also studying to become a Certified Aromatherapist!

Hello and welcome to Essential Oil Haven! I'm an Aromatherapist in training. I use essential oils daily for more natural well-being in my life, and hope to provide you with many valuable resources, tips and reviews to help you do the same.
More about me…

Looking for a Deal?